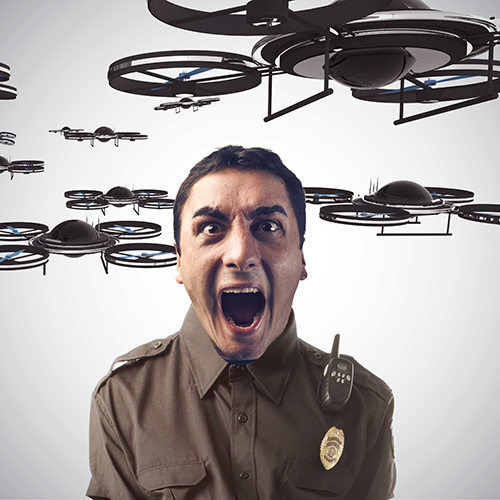 What is Event Security’s Defense Against Drones?

Drones are showing no sign of remaining discreet any time soon.

As they continue to hum across the sky, there’s certainly no shortage of news related articles and opinion pieces in the security industry focusing on the impact of the unmanned aerial devices.

Security professionals from all industries are honing in on drones, the related security and privacy concerns and impact on the future of event security.

With so much discussion on the topic, it got us wondering ourselves. What is the best method to ward off drones? Are there really any advantages to using drones? What are the risks and do they outweigh the benefits?

Either way, you need to be prepared. We can help. Use this article to get a holistic view of the potential – good or bad – associated with the use of drones, and how they affect event security.

In theory, notice we say “in theory,” drones can be used for creative and preventive means. We’re not denying the fact that photographers and videographers at events can capture authentic, mind-blowing images and video. Cool stuff.

In comparison to the value these aerial machines “potentially” provide for event security, the artistic “wow” pales in comparison to the value drones “potentially” provide for event security.  Can you imagine the monitoring capabilities during events utilizing multiple drones?  We can and do, but please keep reading as that’s the scary part we’ll get to later in the article.

Coupled with your incident management process, drones can play a major role in the identification and apprehension of associated persons involved in incidents. The challenge of monitoring large groups of patrons or spectators at events or at your properties is reduced. Using the drones, you can oversee engagement amongst patrons and spot potential hazards before they occur.

The key would be prevention here. Yes, we discuss the complexities and importance surrounding mitigation of risk, but we want to work towards prevention of all types of incidents…all together. Although we understand the obstacles faced by security to control every situation, we want to contribute to the success of security professionals the best we can. We know you’re tasked with a very difficult role in the safety of patrons and staff.

OK. Essentially you have creative and monitoring benefits related to the deployment of drones. We have to ask, “So what?”

A Worldwide Problem for Security

In order to be objective about the use of drones we didn’t want to provide you with a shortsighted view of the subject. The benefits are obvious, but now here are the problems.

To do that, let’s preface the conversation with a timely example.

A 2016 European Championship qualifier between Serbia and Albania ended abruptly on Tuesday from fans invading the pitch to fight with other fans and players.

The outbreak was the result of a banner featuring the Albanian flag that was flown over the stadium by a drone, causing the match to be abandoned “due to a disturbance on the pitch,” according to the Union of European Football Associations (UEFA).

Hundreds of riot police responded and instantly deployed inside and outside of the stadium. Many fans were able to enter the venue in spite of warnings from security officials that they would be arrested.

With results similar to this being feasible, we can only imagine the looming incidents that evolve over time. More importantly, incident escalation! The use of the drone and its purpose lead to an uproar that affected multiple aspects of the operation. Fans, players and security personnel were impacted by the result of this specific incident.

Security professionals have been aware of the safety and security problems associated with drones for quite some time now. But the example above illustrates how one drone incident lead to the cancellation of an important sporting event. That’s just the beginning of what these devices can do!

Consider this. Drones are easy to transport and deploy, making them quite evasive. Most operators can control drones from a distance, posing a serious challenge for security professionals. By the time the device is located the damage has already been done, taking us back to mitigation versus prevention. We want to avoid mitigation if we can ‘prevent.’

Now supplement this with the capabilities of drones. Low-flying aerial devices with elusive qualities, incidents are certain to surface!

Take the aforementioned UEFA occurrence and transform it into an act of terrorism. From arson, guns, bombs to spying, drones give criminals an upper hand with the ever-changing, emergent technology allowing them to be where they want to be without actually needing to be there.

Difference between drones that you control vs. external drones?

Of course, it’s logical that if you control the drone then you can get all the great benefits and mitigate the risk of outside drones. Unfortunately, hackers can take control over your drone causing great harm to your operation. Even if you employ your own drones to enhance security, you’ll be inadvertently creating an added vulnerability.

If You Can’t Stop Them, Be Ready for Them

Drones can be used to harass your patrons, used to smuggle contraband into restricted areas and illegally record and broadcast your events. So what are you doing to stop them?

Currently, they FAA doesn’t regulate them. There’s no registry for unmanned aerial devices like drones to make tracking them a feasible process. The law doesn’t give security professionals an offensive for handling drones as it’s illegal to shoot them out of the sky or to jam their signal.

We might see the ability to use frequency jamming as a form of prevention in the future, but most methods remain illegal at this point.

Here’s what we CAN DO. Drones produce a signature sound when they’re flying. This is your key to prevention.

There are solutions that can bring value to your incident management initiatives. These solutions use microphones to listen and detect ambient sounds. The solutions track the sounds against your database of known signatures and will alert your emergency response team, supervisors and command center via text or an email that a drone is approaching your perimeter.

Paired with your incident management system, a drone detection solution can enhance your overall awareness – a vital piece to ensuring security’s effectiveness. Know where your drone hot spots are and implement the appropriate measures to be ready for and deter as needed.

The ultimate goal is to identify the drone, prevent any associated risks, locate the operator and prosecute as necessary, preventing any future occurrences. Alongside the up rise of active shooters, drones carry a major security risk that will impact your operation. With their existence, risk management and other operational costs may become your responsibility. That’s why stopping them in their tracks is crucial to your effectiveness.

Now is the Time for Execution

If you haven’t seen them yet, it’s only a matter of time before you come in contact with these devices. Their presence is growing rapidly, and the dangerous incidents related to drones are moving from a few to many.

As security professionals, how do you collectively identify the necessary and executable solutions to prevent drones from controlling your outcome? They are a small device with a major impact, one that is exponential in nature.

From active shooters to large-scale terrorist attack, drones can be used as an elusive means for creating incidents. Using solutions together with your incident management process, you can begin to develop a durable approach to the defense against drones.

These Stories on Incident Management

10 Things You Need to Know About Incident Management

Why Live Maps are Important for Your Incident Management System View