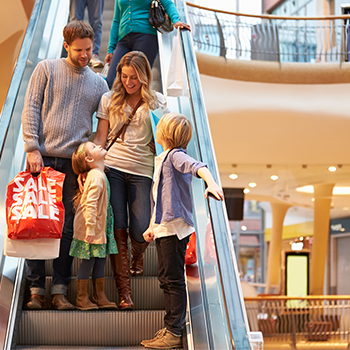 “It’s locked,” he says through the radio.

It’s a slow Saturday night. Usually, the last rush comes in around 6 PM, but you’ve already passed that point.

Jason throws his equipment in his locker, puts his radio on the charger, and says his final farewell as he leaves for the evening.

Now, it’s only you and three other security guards to cover the mall.

You’re the security manager on duty tonight, which means the two other guards automatically get the short straws. They’re stuck walking the mall until close.

You always choose camera duty. It’s your favorite part of the job because it gives you a bird’s-eye view of what’s happening.

But, tonight takes a turn for the worse.

You catch a quick glimpse of a knife-wielding man on one of the cameras near the Macy’s entrance.

He’s approaching people, and from what you can see he has stabbed a few.

Now, another person is injured.

You struggle to grab your radio. “Man with a knife at Macy’s entrance run,” you yell through the radio.

9-1-1 you rush to dial on your phone as you run out of the command center and into the mall.

How would your mall security operation handle this scenario? Would you be able to manage this? Could this attack have been mitigated?

Five minutes of terror occurred this Saturday in a Minnesota mall when, according to a recent article by Steve Karnowski and Amy Forliti of the Associated Press,” Dahir Ahmed Adan put on a security guard uniform and went into a central Minnesota mall armed with what appeared to be a kitchen knife. In an attack that took just minutes, he injured ten people before he was shot and killed by an off-duty police officer.”

According to statements made by St. Cloud Police Chief Blair Anderson, “the attacker began stabbing people right after entering the mall. The victims included eight men, one woman, and a 15-year-old girl.”

The article continues, “Those who know Adan, 20, say he was a calm, cool guy with a good head on his shoulders. They are trying to come to terms with what happened and figure out what pushed him to violence.”

The article offers insight on whether the attack was the first terror attack by a Somali on U.S. soil or a lone wolf attack with no ties to a terrorist organization.

From our perspective and regardless of Adan’s intent Saturday evening, you can learn a valuable lesson here.

Your mall is at risk.

Let’s move your mall from soft target to the direction of a safe, secure, and enjoyable place for your visitors and staff.

Use Proactive Operations to Fortify Your Mall Security Operation

What allowed for Adan to enter a Minnesota mall, confront, and then attack ten people before being shot and killed by an off-duty police officer?

Would you know how to identify your mall operation’s weaknesses quickly? Could you examine and counter the flaws?

It’s challenging. Do you agree?

Utilize Proactive Operations to turn your operation into a proactive one.

Measure Your Mall’s Operation Against the ACDA Principle™

Would you agree that one of the hardest things in life to do is look at our flaws?

Well, it applies to your operation too.

Leaders don’t like to bring to light the weaknesses in their operation. But, that’s the problem causing those weaknesses.

Proactive leaders understand the importance of doing the hard work, which means scrutinizing your operation to see where improvement is necessary.

The Principle gives you the formula to achieve this realization. It’s your strategy.

Push yourself to address your operation. Face the hard facts, and then reap the benefits for everyone’s sake.

Do You Have a Solid Infrastructure?

Many properties miss this aspect of the proactive methodology.

You don’t need to have a complex infrastructure to be efficient. But, you need one, and it needs to be clear and concrete.

It needs to be written. Established. Understood.

Whether you have multiple departments or a few, you need to have a formal infrastructure, so everyone knows how information is communicated.

Incidents will occur – you need to know how to move the information across your organization without hesitation or uncertainty.

A reliable and hard coded infrastructure make it easy.

It’s the 21st Century – Why Are Radios Your ‘Advanced Technology?’

Can we agree that the traditional communication device for many mall operations is still radio?

In many cases, it’s the only form of communication. It shouldn’t be.

It limits you when you should be ‘limitless’ in your ability.

Today, let’s move your operation beyond the core technology applications deployed at your property.

The 21st century is filled with progressive technology to help your mall’s operation skyrocket awareness, communication, documentation, and analysis.

Utilize several software applications to employ a proactive operation across one or many properties.

Collectively, the three forces of Proactive Operations helps any mall maximize their performance.

But, to achieve the highest level of execution you must be ready to scrutinize your operation and do the work to resolve the issues that you have.

You don’t know who or what will come through your mall entrance next. But, you must be ready for whatever it is.

The methods outlined in this article not only help you maximize your performance but they also let you address how your current operation measures up.

Adan’s attack at a St. Cloud mall demonstrates the need for action. Are you ready to employ Proactive Operations?