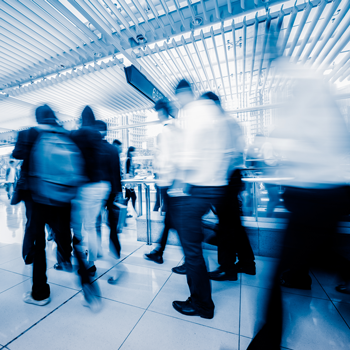 Why Your Airport Needs an Incident Management System

“That’s ours,” you yell to your son as he runs to the baggage claim conveyor belt.

He’s six years old and thinks he is Superman. He likes to carry the heavy bags. You play along because he thinks it is cool.

But, you do follow him to be sure nothing gets missed. Your wife and nine-year-old daughter walk back from the restroom.

Everyone is exhausted. You and your family just arrived home at Dallas Love Field airport from a Caribbean cruise. You like to travel a few times during the summer since your wife and kids are out of school. Your wife is a second-grade teacher at the local elementary school.

“Let’s go, Spencer,” you say to your son playfully as he groans. He gives you a look that tells you ‘he needs help but will not ask.' You smile, then walk over to assist him.

As you grab the large duffle bag from your son’s grip you assert, “I’m taking this one.” He quickly hands over the bag without resisting.

“100 yards to go,” you tell your wife. The two of you have been counting the hours until you have the kids passed out in the car. The car ride home is a sweet moment of peace and quiet.

As you all take your first step on the mat before the exit doors, you hear a man’s voice shouting, “Stay down, stay down!”

You grab your family and flee the other direction. You peer out the nearest window to see what happened. A police officer has his gun aimed at a man lying on the floor outside.

There are people everywhere. There are many witnesses, which means many different accounts of what occurred.

How would your airport handle this? Would you have the ability to capture the details of this incident?

Would the situation end with ‘it is his word against ours’ or would your property be able to gather complete and accurate details of this event to protect the airport from liability?

Melissa Gray and Madison Park report in their recent CNN article, “Officers shot a man involved in a domestic disturbance outside the Dallas Love Field airport terminal after he rushed one of them, police said Friday.”

The report then explains that “A man was throwing rocks at his ex-girlfriend's car outside the baggage claim area after she tried to drop him off at the airport, Dallas Police Chief David Brown said in a news conference.”

According to the article, “The man was holding a rock in both of his hands when an officer responded to the scene, he said. Video footage released by the airport showed the officer retreating while the man walked toward him.”

Police say, “The man was shot several times after he rushed the officer. He was taken to a local hospital, where he is in stable condition, Brown said. The police chief defended the tactics used by the officer as "quite appropriate" and said the surveillance footage told the story.”

As you already know, these events can affect your airport in many ways. Severe incidents such as shootings create bottlenecks in your operation.

The time it takes for passengers to make it through TSA checkpoint lines increase. Visitors are stuck in certain areas, which prevents them from leaving.

An event like this creates many disruptions that might halt your operation or, even worse, cripple it. The ripple effect that ensues is disastrous.

This ripple effect creates a greater challenge for your airport that you might not have thought about, but need to: Liability.

From the shooting to the string of events that occur as a result of this incident, generates much information to gather. You must ensure your airport captures every account, statement, and detail.

Your airport needs an incident management system for liability protection.

The problem is, you are not obtaining the information you need without an incident management system implemented.

Your police, medical, and administration departments are writing this information with pen and paper while dealing with the obscurity of the event.

It is in your best interest to have all of this information gathered and at your fingertips. Your incident management system affords you this ability.

Consider the Dallas Love Field shooting. Digitally capture all communication, event details, and related documents, from video to audio & written witness statements. How powerful would this be for your airport?

You can even enhance your ability to secure this information while at the scene. Learn about how airports use incident management solutions to optimize the capacity to obtain data on mobile devices here.

Not only do you gain complete and accurate accounts of the incident, but you also have an extensive digital trail of everything that occurred – even if there is a legal case that arises several years later.

A police officer fires their weapon; the suspect gets injured, but the bullet ricochets. Now, you have an additional incident to report.

Medical must tend to the injured victim, which leads to a report by medical, police, and airport administration. Your solution lets you link this incident to the shooting incident, and any other incident that occurs during this event.

If your airport director and legal representation appears in court, they have every detail of the occurrence. This is Proactive Operations.

The power to lock incidents

Overseeing an incident like a shooting, especially if it turned fatal, is a heavy burden. You must take every step seriously. You must cover all bases to protect your airport.

Your incident management software lets you lock your incidents. Prevent outside personnel from ‘tampering with evidence’ whether it be accidental or intentional. You do not need an internal investigation on your hands. Do you agree?

Locking the shooting incident, and all related incidents, prevents further changes from that point moving forward. Only you have the ability to access the incident.

Custom fields for the reporting needs of your airport

FAA requires documentation; TSA has their reporting requirements; local police file a report, and the emergency responders have reports of their own. Why not simplify the process to capture all the details?

Create custom fields in your incident details forms to duplicate agency forms that are required by each department that is unique to your airport.

This streamlines the flow of information and data for your facility. Now, when everyone appears in court – everyone is protected! It is ‘his word against what happened’. You can prove it.

Liability protection tops the list of priorities for any property. Use your solution to capture comprehensive details of everything that occurs in your airport.

It is up to you to ensure nothing gets missed. This is the reason why your airport needs an incident management system.

These Stories on Risk Management