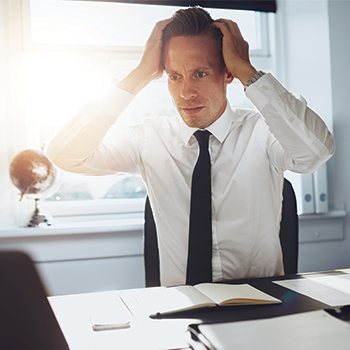 Goodbye to the ‘Surrender Cobra’ in Your Operation

Emanuella Grinberg writes in her recent CNN article “It’s bowl season: Watch out for the 'surrender cobra” to “look around the stands of any stadium during the fourth quarter, and you'll see it.”

“It's the universal signal of anguished defeat, the gesture that shows you've all but given up hope for your team,” according to Grinberg’s article.

Her article goes on to explain, “The "surrender cobra" made its debut in popular lexicon in 2013 in Grantland's college football dictionary. It was defined as a "pose frequently adopted by fans witnessing unfortunate sports happenings, characterized by clasping hands on top of head as though one is under arrest and a slow, tense exhale of breath."

“The Internet embraced it, adopting the #surrendercobra hashtag and launching a Twitter account and other online forums to catalog the most impressive examples. Even coaches and players are susceptible,” Grinberg elaborates.

But, the surrender cobra is not a gesture only experienced by faint-hearted sports fans.

Grinberg explains further that the gesture carries over to other aspects of life.

It’s because this gesture is a sign of distress.

You’re throwing in the towel because you don’t know what else to do at this point. You’re surrendering to the perils in your way.

“The idea of surrendering is very much embedded in the action of linking fingers, which signals withdrawal from a situation. It's not an inherently negative gesture. We clasp our fingers against our body when we lay on the beach or next to the pool in a sign of relaxation,” according to communication coach, Nick Morgan.

Morgan continues that, “It's when we raise our arms that things start to get increasingly emotional. When your arms are resting at your sides, that's the "coolest emotional signal" you can send. As you raise your hands, it signals an increase in emotion as you become more engaged, maybe even defensive. At concerts or political rallies, raised hands might signal excitement or exultation. But the combination of clasped fingers on your head imparts an entirely different signal.”

Grinberg’s explanation goes even further as she explains that Morgan “works with executives who frequently deploy the surrender cobra in unproductive meetings as a gesture of handing off the reins – and not in a good way.”

"They're checking out of the situation. They're there, but they're not there anymore," says Morgan.

That’s when we had our epiphany.

We had to warn you of this gesture because it’s a sign.

Now, you’ve probably experienced it yourself – specifically in your operation. You might even do it more often than you want or are willing to admit.

But, you’ve been welcoming the ‘surrender cobra’ into your operation because you don’t have Proactive Operations in place.

Today is the day you say “Goodbye!”

No one likes to feel defeated.

The feeling is overwhelming, and you lose all clarity at that moment.

There’s a way to reverse the effects.

You can alter the course of your operation, and use the surrender cobra as a signal to address the issue.

You can take your operation head-on to overcome the weaknesses that lead to lifelong operational struggles.

These are all situations where the gesture is applicable.

But, you have an advantage over sports teams and their fans – you’re only competing against yourself.

You can do it by employing (and continually strengthening) these areas of your operation:

Enhancing each of these areas of your operation eliminates the need to ‘assume the position.’

It’s because you’ll have created an environment of efficiency.

Once you’ve founded Proactive Operations, the insight gained will be the result of all the data you’re able to analyze.

Now, you’ll be able to throw your hands up in elation!

Continue doing all you can do. But now, the results will always be in your favor.

Are you ready to say goodbye?

The surrender cobra is certainly not only seen throughout sports. We all “surrender” from time to time. But now, you’re able to use it as a sign to initiate improvement, rather than to accept it as a sign of defeat.

Take a moment to understand what’s causing you to assume this position. A little attention to the details might help you make your operation ‘surrender cobra’-free forever.

You Need a Unified Solution (Not Individual Tools)