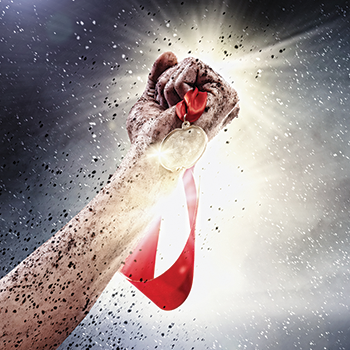 According to Mather’s New York Times article, “Clemson upset Alabama and won the college football national championship, 35-31, in Tampa early Tuesday morning. Clemson was led by its star quarterback, Deshaun Watson, who threw for 420 yards despite facing a defense heralded as one of the best ever. With two minutes left, trailing by 3 points, Watson got the ball at his own 32 and started a drive. Nine plays and 68 yards later, with 1 second on the clock, Hunter Renfrow caught a 2-yard touchdown to win the game. The drive included six completed passes, notably a 24-yarder to Watson’s favorite target, Mike Williams, and a goal line pass interference call.”

A miracle? Some call it a surprise. But to Clemson, it was nothing other than expected.

After Clemson’s CFP Championship loss to Alabama last year, they didn’t stop. They didn’t keep their heads down or throw in the towel. It wasn’t over for them.

Last year made them want it more – more than ever. Their only option: to be the best.

They put in the time, made the sacrifices, and examined their system to beat the odds against them.

They made it back to the big game. This time was different, though.

This time, they won.

You win some; you lose some.

Well, for Clemson it has been 35 years since their last championship season. 1981 was the year.

That’s a long time to wait. But, that’s a story of the past now isn’t it?

They’ve got a new coach, team, and way to win. It took them a couple years to perfect it, but they got it right.

They didn’t give up too quickly – and it paid off.

How’s this for a ‘winning’ lesson?

The bottom line is, you’ve probably been doing the same thing throughout your operations for a while now. Not necessarily 35 years, but you’ve been doing it long enough to know it’s time for a change.

You might’ve been introduced to Proactive Operations before today. But, it’s still new to you, and you’re afraid of what lays ahead.

You’ve got a lot of responsibility, so it’s fair to feel this way. But, you also know what lays ahead if you don’t make the needed change.

Employ Proactive Operations throughout your operations.

Now, we’ve seen plenty of operations take a couple of times to get it right and get it done. The good news is, though, is even after the ‘second try’ you might just get it right like Clemson, and for good.

There’s a lot to be said about a team that loses and comes back the next year to beat a #1 ranked team – something Clemson has never accomplished before.

It makes you contemplate about what your team is capable of achieving, doesn’t it?

Plan to Win at Proactive Operations

You can win big too.

But, you’ve got to start somewhere.

Trust us, knowing where to start is the most difficult challenge for most operations. “Where do we start?” is a common question we’re asked.

So, you’re not alone here.

You have many moving parts to address, which makes where to start a tough question to answer.

Here’s the thing; it’s always ideal to start employing Proactive Operations before your budget season, fiscal year, or your real season starts (for the sports operations).

It allows 100% focus on the implementation. From having funds available to the attention of all stakeholders, it’s the best time.

We all have to face the music at some point, though. Start the process today.

It might take a couple rounds to get it perfect too. Clemson is proof.

But, be determined to win at Proactive Operations – and you will.

Here’s how you start the process today:

Now, this is only a synopsis of what you need to get done. We are firmly urging you to learn more about how to institute each aspect of Proactive Operations fully.

Over to You, Champ.

Like winning the CFP Championship, employing Proactive Operations is no easy feat. But, when you invest the time to do it we can assure you it pays dividends for years to come.

Don’t let fear of change or temporary defeat hold you back from achieving maximum performance. Put in the necessary work, make important decisions, improve and optimize, and win-win-win!