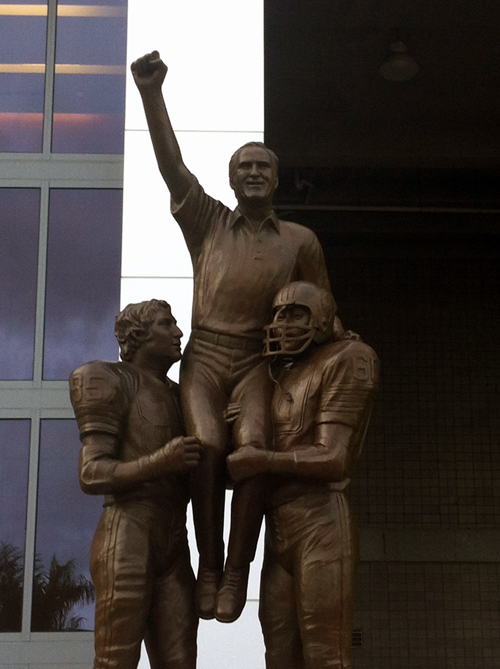 During his 25 years as head coach for the Miami Dolphins, Don Shula inspired us to be winners. With longevity like his, who wouldn't want to follow the footsteps of this legend? Knocking George Halas off the mountain to become the all-time leader in career NFL wins was just the cherry (or icing, whichever you prefer – we like options) on top.

Don Shula knew how to make the conversation about the game simple - just win. If you’re winning what’s really the point of talking about losing? With only two losing seasons, and leading the only NFL team to a perfect regular and playoff season record, there’s no question he was a leader. The lessons he lived by is why he became a legend.

Shula inspired greatness on the football field, but knew his leadership methods could apply in the workplace. He created an acronym, COACH, describing an effective leader’s qualities.

Overlearning: Practice until it's perfect.

Audible-Ready: Know when to change.

Don Shula made a career of turning individuals into a team. He understood acquiring the perfect player is not the only way to win. Finding players with value, now that’s the formula. He developed the skills of players and gave them roles to contribute to the long-term success of the team.

“I think what coaching is all about, is taking players and analyzing their ability, put them in a position where they can excel within the framework of the team winning. And I hope that I've done that in my 33 years as a head coach.” – Don Shula

If you’re preparing for a new season of sports, festivals, concerts, races, or tourists visiting your facility, we recommend you take some worthy advice from a legend. People have to work for you, but it doesn't mean they’ll listen to you. Foster your credibility by communicating and incorporating these lessons into your facility’s culture. Have your team saying, "put me in, coach!"

We’re handing the ‘ball’ off to you now. Break!

Previous Story
← An Assessment of Brazil’s 2014 World Cup Security – Safe to Say, It’s Not Safe?
Next Story
This Event Taught Us a Lesson in Accountability →

These Stories on Training